In May 1940 Rotterdam was bombed and not much of the old town did survive. Once the war was over, construction work went on day and night, the scars of war gave way to a totally new center and harbor, the later equipped with the newest technology and machinery. This, combined with the direct access to the North sea, made the Rotterdam harbor the most important one of Europe.

Rotterdam’s fame is not based exclusively on the harbor. It also stands out in modern architecture. The so badly damaged city had to find a new identity, which resulted in remarkable and unconventional architecture.

Last but not least: there is a strong link between Rotterdam and the United States. It was from Rotterdam that in the year 1620 a large group of Pilgrim Fathers went to the States. During the nineteenth and twentieth century they were followed by migrants from all over Europe who embarked on the Holland America Line to New York. 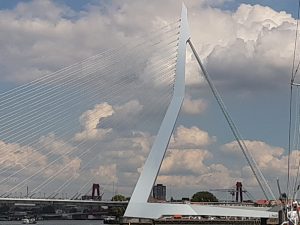 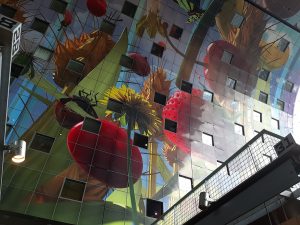 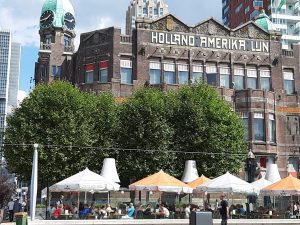 The tour starts at a project entitled by it’s architect Piet Blom “a forest of houses”. We will visit one of it’s 68 cube houses. Next stop will be one of the most recent projects of MVRDV Architects, a combination of apartments and a food hall. By water taxi we will pass by Ben van Berkel’s Erasmus Bridge, the towers of Rem Koolhaas and Hotel New York. The tour will be concluded by sailing through a section of the Rotterdam harbor.

Delfshaven did suffer from the 1940 bombing and it is still a very authentic part of Rotterdam. In the year 1620 Pilgrim Fathers from the Dutch town Leiden went to Delfshaven to sail with the Speedwell to Britain where they boarded on the Mayflower bound for the United States.

From Delfshaven we will go by water taxi to the peninsula were hotel New York, former head office of the Holland America Line (HAL) is located. Nearby is the HAL  passengers terminal from where nowadays guests board for a cruise. In the old days boarding was no pleasure at all: it meant leaving behind family and friends, probably for ever, to start a new life in the States.

The reconstruction of Rotterdam in the fifties was based on the urge to provide new housing as fast as possible. Quantity didn’t always match quality. This resulted in neighborhoods where only those who couldn’t financially afford to leave did stay.

The counsel of Rotterdam has tried and keeps trying to put a hold to this social segregation by upgrading housing and public space in the areas most affected.