Before World War II, Amsterdam had a large Jewish population, Ashkenazim and Sephardi as well. Although their residence was not restricted by the city counsel to a certain area, there was a concentration of Jewish citizens in the eastern part of town, nowadays known as the former Jewish neighborhood. Here we find the testimonies of Amsterdam’s Jewish history and the genocide committed to the Jewish population: the Portuguese Synagogue, places related to diamond industry, the Jewish History Museum, the theater used as a detention center during WW2 and the Wertheim park with the Auschwitz memorial.

This tour sets of with a walk through the traditional Jewish neighborhood and continues, after a half hour break needed for transportation, in the area were Anne Frank’s family and many other German Jews settled in the nineteen thirties. There we will see were Anne lived, played and attended school. The last section of this tour is focused on the place were Anne Frank and her family went in hiding, the Anne Frank house, the former work place of father Frank, situated  alongside the Prinsengracht..

Duration 2 hours tour, twice half hour break in between. Makes 3 hours in total.

It was from Amsterdam that Hudson sailed to what became known as the Hudson bay and it was basically due to Amsterdam investors that present day New York was founded. John Adams came to Amsterdam seeking support for the new born republic of the United States. His trip was not in vain. The tour will lead along places which formed the cradle of the strong Dutch-American connection.

Between the years 1915 and 1930, the architects of the so called Amsterdam School designed many blocks of Social Housing, applying a very sculptural architecture. Their most famous work is “Het Schip” in which apartments, a school and a post office coexist very harmoniously. The subjects of the tour: the ideals of the Amsterdam School architects, their position in society and the characteristics of their architecture.

Amsterdam 7 (only available as on location tour)
New Amsterdam

A tour on bike along sites of urban extension. Focus on architecture and the process of urban planning.

Amsterdam 8 (only available as on location tour)
Highlights Rijksmuseum 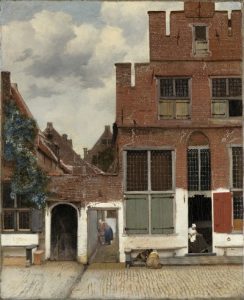 The State Museum of Art offers the richest collection of Dutch Masters from the 17th century. Think about, Rembrandt, Vermeer, Frans Hals and many others. Less known, but excellent as well, are the works of art from the 19th century. We will pay attention to both collections. Questions to be answered during this tour: What does the painting represent? What makes the work special? What does it tell about Dutch culture and history?

Amsterdam 9 (only available as on location tour)
Highlights Rijksmuseum and Van Gogh Museum.

This tour combines the Dutch Masters of the 17th century from the Rijksmuseum with a visit to the nearby Van Gogh Museum. There we will focus on the life of Van Gogh, the evaluation of his style, his relationship with colleagues and his influence on later generations of painters.