To reflect on the culture of one’s own country, it is good to have a look on the other side of the hedge. That is what we offer in this lecture on education, housing, health care, social care, taxes, economy and political system.

Lecture 2
The Dutch and water

Water has always been both a friend and an enemy. Friend because of shipping and beer brewing, enemy because of flooding. During this lecture we will focus on these and other aspects of the love-hate relationship of the Dutch with water.

This lecture starts with looking back in the history of the four largest towns of the Netherlands: Amsterdam, Rotterdam, The Hague and Utrecht. When did these places come into existence? What were the forces behind urban growth and decline? 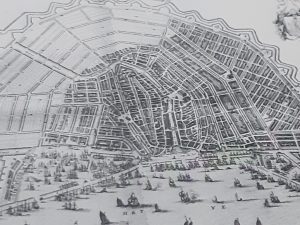 The second part of the lecture is dedicated to the present day process of urban planning. We will consider the impact of state, city, construction companies and citizens on the planning and realization of urban extension and urban refurbishment.

In this set of six  lectures art and history and geography come together. Paintings from the Rijksmuseum -the most important art museum of the Netherlands- are used to illustrate the most important decision makers, influencers and moments of transition during the last two millennia.

The aim of the lectures is to provide insight into the formation of present day landscape and patterns of urbanisation and land use.  The answers lay in the decisions and activities of “mankind”. As this category is too big for a fruitful analyses, a differentiation is made between the rulers and those being ruled.

Developments in the Netherlands can not been seen in isolation of what happened on the European stage. That is why  there is a constant switch between a helicopter view of Europe and a zoom in to the situation in the area nowadays known as Holland and the Netherlands. Some of the “external parties”in the development of the Netherlands: Italy (the Romans), Germany, France, Belgium, Spain, England, the United States, Suriname, Indonesia.

Lecture 5
The Dutch masters of the 17th century.

Rembrandt, Vermeer and Frans Hals are just some of the many big names in Dutch painting of the 17th century. This lecture we start with the social, economical and religious context of the seventieth century. This will help us to find answer to the following questions:

*What sets Dutch art of 400 years ago apart from South European art?

*Why were there so many fabulous painters at that point in time?

*What was the influence on Flemish art on the Dutch painters?

The second part of the lecture consist of comments on the most famous paintings of Rembrandt, Vermeer and Frans Hals

Vincent van Gogh is the most popular painter of the world. Had he known what future held in store for him, he might have lived a happier life, not cut off his ear and have refrained from committing suicide.

This lecture starts with a review of Vincent’s live: Where did he grow up? Where did he go afterwards? Who did he met? Did he have love affairs? Why did he cut off his ear and commit suicide?

The second part of the lecture will be dedicated to some of his over 800 paintings.